One of the biggest issues that saxophonists must deal with is the challenge of finding a good reed. We all know what it’s like to buy a box of reeds and come across some reeds that are either too hard, too soft, mis-cut, warped, or chipped. Although there is not a reed manufacturer today who can guarantee a box of five or ten reeds for soprano, alto, tenor, or bari saxophone that all play consistently and evenly throughout the entire range of the horn, Alexander clearly seeks to achieve that goal.

Alexander Reeds, was founded by Tom Alexander after he became tired of the inconsistencies with the reeds currently on the market. Instead of searching for another brand of reed to try out, he decided to manufacturer his own line. Since the early 1990’s, Alexander Reeds has come out with the Superial, DC, Classique, and in 2007 came out with the NY. All models were cut for both saxophone and clarinet. What enticed me to try out this brand of reeds was the overall consistency that I have read about through online forums as well as my conversations with endorsing artists and local players who exclusively use Alexander reeds.

The reeds I am going to be reviewing are the Superial, Superial D.C., and NY for tenor saxophone and the Superial, and Superial D.C. for alto saxophone. With each box of Alexander reeds came  a set of “preparation” instructions to help you maximize the reed’s playing potential. I used this method on some of the reeds that were a bit soft or hard and I noticed after a couple of days that many “so so” reeds gradually became better reeds that I would be happy to play on. (I’ve included Alexander’s preparation method at the end of this article.)

Tone: I found the Superial reed gave me a brighter tone. I found that from low Bb to C the reed responded very well, but what really caught my ear was when I played from middle C to high F#. In this range, I was able to produce a bright and centered tone in the palm keys which is something I have been struggling with when using other manufacture’s reeds.

Playability: The Superial reed played evenly throughout all registers of the horn. I felt like I could really push this reed and it would not die out. The response was instant when I put on the reed and it seemed to take very little time to break the reed in.

Consistency: Out of the 5 reeds I tried, three of them played great out of the box and on two of them I had to use the recommended preparation method, which seemed to make the reeds more playable.

Comparison: The Superial Reeds are most similar to the Vandoren Java or the Standard Rico orange box Tone: When I tried the Superial D.C. reeds I found out that I was able to produce a even and focused sound throughout the entire range of the horn. The sound was darker than the Superial and I found that the bottom range of the horn, down to the low Bb, had a really big and  cutting sound.

Playability: I found the D.C.’s to be just as free-blowing as the Superial, but I liked the edge I was able to get with these reeds. I found these reeds to be very stable throughout the entire range of the horn when practicing my long tones. My high A, B, and C also had a more solid sound that did not seem thin or weak.

Consistency: I found the Superial D.C. to work well with my setup. Four out of the five reeds played great. With one of the reeds, I had to use the preparation method as well as a little sandpaper work to get it playing the way I wanted it to.

Lifespan: I believe due to this reed’s slightly harder tip as well as the relatively generous amount of wood in the heart, the lifespan of these reeds may be a bit more than that of the Superial.

Comparison: The Superial D.C. Reeds are most similar to the Vandoren ZZ, Rico Jazz Select, and Rico Royal Tone: According to the company’s website, Michael Brecker worked with Tom Alexander on designing this new cut. The tip was redesigned and is different from the Superial and Superial D.C. The new tip was designed to give the saxophonist a powerful and resonating sound. The intention was to give the saxophonists a little bit more of the tonal “edge” that is generally associated with many of the players in New York. With the NY cut, I was able to really lean into the upper register and get a loud and full sound when I went up to the palm keys.

Playability: The NY was very free blowing like the Superial, and Superial D.C. I found very little resistance when playing throughout the entire range of the horn.

Consistency: With the NY, I actually found these reeds to be a bit harder (even with a 2.5) than the Superial and Superial D.C. Because of this, I decided to use the Alexander preparation method which made three out of the five play very well. On the other two, I used sandpaper to shave them down and make them softer.

Lifespan: I would have to say the lifespan of these reeds would be similar to the Superial D.C.’s.

Comparison: The Alexander NY Reeds are most similar to the Vandoren V16, La Voz, and Hemke. 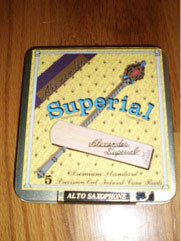 Tone: When I played the Superial reed on alto, I found it to give a bright and edgy tone that you would most associate with a lead alto in a big band.

Playability: These reeds were as free-blowing as the ones I tried on tenor.

Consistency: Four out of the five reeds played great, and I ended up shaving off a little bit on the fifth one since it was a bit stiff.

Lifespan: Since I have been rotating these reeds every couple of days, I have had no issues in any reeds getting too soft or just-plain dying out. Tone: When I played the Superial D.C., I found these reeds to have a darker but somewhat warmer sound compared to the bright and cutting sound of the Superial reeds.

Playability: I found these reeds to be harder than the Superial reeds, but still very playable through the entire range of the horn.

Consistency: I found that I used the recommend preparation method on three out of the five reeds, which made them a bit more free-blowing and easier to play.

Lifespan: These reeds had a similar lifespan to the Superial. I have had no issues thus far and have not seen any issues of reeds dying out or becoming too soft.

I would have to say that Alexander offers a line of reeds that many saxophonist will enjoy playing. I found the overall consistency of these reeds to be better than other brands I have tried and believe that the combination of the product and the preparation method Alexander recommends is what sets these reeds apart from other reed manufacturers.

For additional information, that you would like to know please visit http://www.superial.com/home.html

If you have any questions or have played Alexander reeds, please leave a comment to let me know what you think.

As promised, here is the preparation method from the Alexander website:.

“We suggest that you break the reeds in by first soaking them for about 2-4 minutes in lukewarm to warm water, and making sure that the whole vamp, and not just the tip alone, gets wet (a reed that is too dry or only wet at the very tip might tend to squeak). Some players, especially in dry weather, prefer a little more soaking time and a some others like immersing the whole reed in the water. Then again, if you soak it for too long, it may end up becoming waterlogged, so try a balanced approach. And make sure you wet the reed each succeeding time you play thereafter, though you may find that as it gets broken in, less soaking time will be necessary.

After the soaking is operation is done, place the reed you want to prepare on glass or a similar flat surface and massage it (starting from the back of the vamp slope) with your finger or fingers several strokes forward towards the tip, in order to help close off the fiber ends and stabilize the cane.

Then comes the break-in secret, which is certainly no original idea of mine, but a time tested practice for reed longevity:
Break in the reeds you prepare by only playing them at no louder than mp-m and for the first day only a few minutes and maybe 5-10 minutes the second day.

By breaking them in at mezzo or softer and for not too long in the first couple of days, the reeds should last longer and be more stable for full bore playing later. Playing them all out in fortissimo from the first 2 days might overstress the tips.
The exception to the break in is: If the new reed you try feels a good bit too hard, you can skip the break in period and just play in normally from the first day.

A tendency of these reeds is to harden a little after a few days of playing, so you may find a slightly softer reed that will end up being perfect in a few days after break in. If you find a reed that is too hard even if you skip the break in.”

Hailing from San Francisco California, Zachary Sollitto is a man of many skills and many passions. His love for playing jazz is paralleled only by his passion for the world of saxophones and saxophone equipment. Perhaps more than just about any saxophonist you're likely to meet, he maintains an up-to-the-moment awareness of the latest and greatest products hitting the market for saxophonists. Whether it's saxophones, mouthpieces, neck straps, or just about anything else, Zach is the man you want to talk to. Manufacturers looking to have their saxophone products reviewed can reach him by email at zach@bestsaxophonewebsiteever.com or by phone at 954-292-2951.
« Ask a Saxophone Repairman: Relaquering, Finding a Repair Person, Neck Cork, and More » The Path to Your Biggest Saxophone Sound Ever