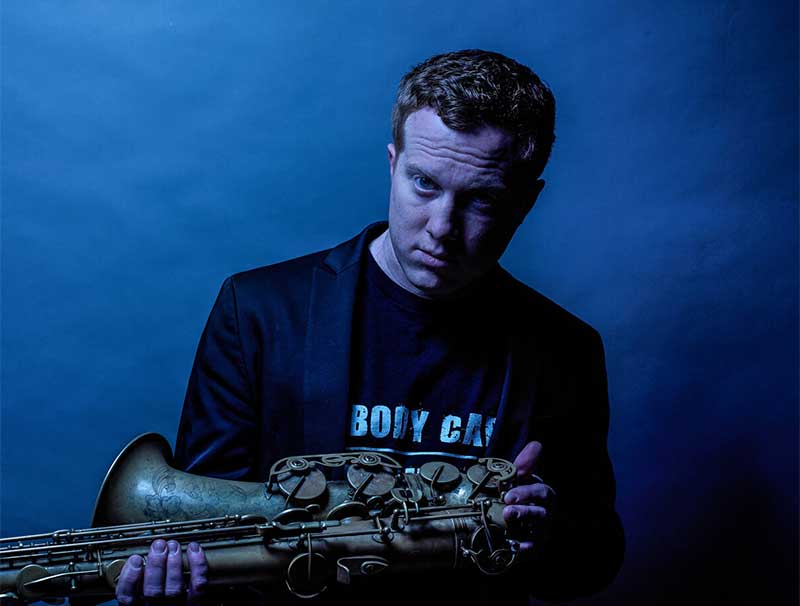 Unlike its advanced counterpart, Little Leaps and Sounds contains harmonic analysis for each etude, both in diagrammed and written text form. At this more intermediate level, it is perhaps even more important to explain why notes work and sound good. Thus, I’ve taken great care to address approach tone devices, melodic sequencing, diatonic phrases, melodic quotes, and other ingredients commonly found in the jazz solo we all love.

The etude we’ll look at, titled, Boss-uh (which will shown in its entirety later on in this article), begins with a melodic sequence that is more intervallic in nature compared to most of the other etudes in this collection. The sequence is built upon fourths and thirds diatonic to the chords.

Measure five makes use of a major-flat-six pentatonic from the seventh of the chord. Using this scale implies the sound of locrian-sharp-two, which is the sixth mode of melodic minor.

The sixth mode of melodic minor by definition is half-diminished, with a natural two, expressed as a chord symbol as -7b5#2. Rarely seen, this chord can be used as a substitute for the much more commonly seen -7b5 chord. The function of the chord does not change, but rather, the sound of the chord and scale that accompanies it changes slightly with the second note being raised one half-step.

Measures seven and eight are in reference to the beginning melodic sequence/motif.

The green notes in measure seventeen are examples of upper and lower neighbors to their target tones (red notes).

The prevailing sound in measure twenty-two is concert G augmented, via permutations of the triad itself. Measure twenty-three is implying the sound of melodic-minor. Measures twenty-five through twenty-eight are fairly diatonic with the exception of a few passing tones. The green notes in measures twenty-eight are an enclosure to their target on beat three (red note). More on Little Leaps and Sounds

Because the ranges of these etudes are geared towards the traditionally accepted range of the saxophone, I’ve also gone through the process of creating a trumpet, bass clef, guitar and TAB versions of the book. It is with great thanks to Dr. Siereveld that we have a trumpet version, Marcus Lewis that we have a bass clef version and William Flynn that we have concert and guitar-TAB versions of the book. Each of the books comes with play-a-long tracks that feature professionally recorded soloist tracks to play along with, as well as tracks that allow the performer to play without the soloist. The version of the book for Eb instruments is available with both alto and baritone saxophone recordings and the version for Bb instruments is available with both tenor and soprano saxophone recordings, all of which have been recorded by myself. The trumpet etudes have been recorded by Dr. Eric Siereveld, the concert etudes by William Flynn and the trombone etudes by Jack Kotze.

Whether you are looking to do a deep-dive into harmony or simply want to enjoy playing some newly created etudes with a fresh harmonic vibe, Little Leaps and Sounds will be a great addition to your collection of study materials.

Click here to pick up a copy for yourself!

Adam Larson (1990), is a saxophonist, composer and educator who began playing saxophone at the age of 11. Described by critic Howard Reich of The Chicago-Tribune as “a player for whom the word ‘prodigious’ was coined”, by Peter Hum of the Ottawa Citizen as “a saxophonist who brings Donny McCaslin and Mark Turner to mind”, and by Nate Chinen of The New York Times as “the sort of jazz musician who gets flagged early on as a promising talent and then hustles to meet every requirement for success”, Larson has garnered numerous awards that distinguish him as one of the most promising artists of his generation. Adam holds BM and MM degrees in Jazz Performance from The Manhattan School of Music, where he graduated with honors as a Master's student as the recipient of the William H. Borden Award for Outstanding Performance in Jazz. Adam is an endorsed artist for P. Mauriat saxophones and Vandoren reeds, ligatures and mouthpieces.