This is a general term that I use that includes the use of the descending be-bop scale (half step between the root and dominant 7th) and all the various versions of the ascending and descending major be-bop scales…check out the many videos on this subject that are based on the teachings of master Barry Harris. Under this general heading, I also include the use of upper and lower approach notes (half steps above or below the target chord tone) and enclosures: the use of both upper and lower approaches. Clifford Brown comes to mind as a master of this technique.

I’ve found that most younger, more inexperienced players tend to avoid or shy away from these “avoid” notes. As a result, their lines tend to sometimes sound awkward because the guide tones end up falling on weak parts of the measure. Besides the color that these passing/approach tones add, one of their main functions is to place the target notes on the strong beats of the measure.

That being said, I feel that it is extremely important to be able to master the technique of NOT using these chromatic notes – i.e. to improvise using nothing but the appropriate major or melodic minor scales. The goal here being to develop the ability to hear and feel the “right notes in the right places.” Once you are able to confidently hear and play melodies without the use of these “avoid” notes, the chromatic passing tones and enclosures become natural extensions of your melodic conception, thus adding color and interest to your lines. With these two concepts in mind, I offer the examples below. Note that at no time am I thinking of any harmonic tensions or extensions…only scales and chromatic embellishments. Once these two techniques are absorbed and become second nature, the next step would be to start altering the chords and harmony. The perfect example of this logical progression would be John Coltrane from his Prestige through Impulse periods.

From Rick’s series of Etudes based on standards:
All The Things You Are
Go to the link above, and share on Twitter or Facebook to get a discount! 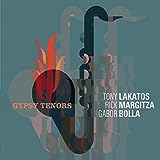 Born in Detroit, Rick Margitza has studied classical saxophone with Donald Sinta at the university of Michigan, and jazz with Sonny Stitt, Gerry Niewood, Michael Brecker, and Gary Campbell and David Liebman. He studied at Wayne State University in Detroit, the Berklee School of Music in Boston, the University of Miami, and graduated with a bachelors of music from the Loyola University in New Orleans. After living in New Orleans, Margitza moved to New York in 1989. He has performed and/or recorded with McCoy Tyner, Bobby Hutcherson, Tony Williams, Eddie Gomez, Chick Corea, Maria Schneider, Dave Douglas and Miles Davis. He has led his own band and performed in clubs, concert halls and festivals around the world. His 10 albums as a leader document the evolution of his playing as well as his growth as a composer. Margitza has also composed music for orchestra including two symphonies and a saxophone concerto. He currently live is Paris since moving there in 2003. He is of Eastern European Gypsy decent and is part of the new band called Gypsy Tenors with fellow countrymen Gabor Bolla and Tony Lakatos. He is also in the process of finishing an album of his big band music as well as a new recording with his French quartet.
« The “Easy Easy Bebop” Method of Learning Jazz as a Language » Retro Revival Aims to End Your Hunt for Classic Mouthpieces