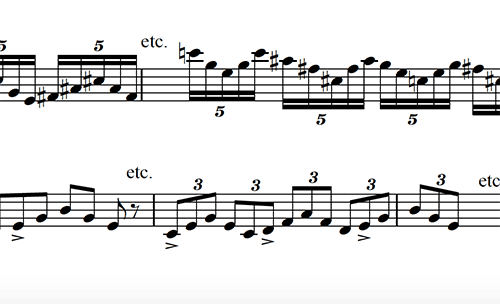 If you’re like me, you’re always looking for ways to vary your practice routine, improve sense of rhythm and expand your language as an improviser.

Here are a few exercises that incorporate groups of five notes (quintuplets) into some very simple triadic exercises that you can practice over the entire range of the saxophone.

Some of you might find quintuplets a bit daunting, but they’re nothing to be afraid of. Find any five syllable word or phrase and then tap quarter notes with your foot or put your metronome on at a nice medium tempo. Say your word of phrase – I like using the word “hippopotamus”. “Tenor saxophone” also works well, or “alto saxophone” for those of you with a bit of a bias towards the smaller horn – and just say that word or phrase in time with your foot or the metronome.

Not too bad, right? Being able to feel these fives will do wonders for your sense of time, and quintuplets aside, you can also group eighth notes and triplets into groups of five, which will start to get you to feel accents in perhaps some new places. Now for the examples. (Note: These are all written in C Major. As always, take these examples through all your keys). Once you start to work with these triad pairs, the possibilities are endless, as you can then use all the variations from the earlier examples to build your own patterns. And don’t forget your minor keys as well!

And as I mentioned before, you can do five note groupings with eighth notes and triplets as well (see example 9).

As always, practice slowly, mindfully, and creatively. Besides going through these to build your technique and vary your general routine, think about how you can incorporate these into your improvisation as well.

I’d love to see your own ideas and variations in the comment section below.

Learn with and Listen to Sam

Sam Sadigursky is currently offering online lessons through Skype and private lessons in NYC. He has given improvisation clinics across the U.S., is a regular guest professor at Hunter College, and currently performs internationally with Darcy James Argue’s Secret Society, Folklore Urbano, and others. His new book, 12 INTERVALLIC ETUDES for Saxophone, is available here. His albums can be purchased at http://samsadigursky.bandcamp.com. To find out more, visit SamSadigursky.com.